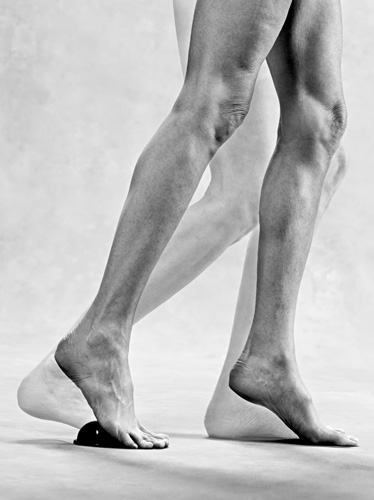 Also sometimes called "fallen arches", the condition of flat feet is characterized by a lack of appropriate arch in the inner foot. It can be a genetic condition or the result of improper body mechanics. Often the whole of the foot will contact the ground with little to no arch being present. Because a normal foot is structurally able to support the weight of the body thanks to the bone structure that comprises the arch, a flat foot often is unable to properly support this weight and will cause extreme pressure in the joints in the foot and above, such as the ankles, knees and hips. Other problems such as tendonitis, bunion and hammertoe deformities, arthritis of the foot joints, and chronic fatigue of the leg muscles can also result.

Flat feet are often a congenital problem which has no specific cause. They can however occur after an injury, especially conditions such as Tibialis Posterior Syndrome or more traumatic injuries such as fractures or mid-tarsal joint sprains. The other thing to look out for is Overpronation. Often this is confused with having flat feet (or a fallen arch) although it is not technically the same thing. If an individual does not have flat feet but does overpronate then the arch of their foot appears to be normal when standing. However, when they walk the arch collapses and the foot rolls in excessively. This is more difficult to spot than flat feet. It is estimated that between 60 and 80% of the population overpronate!

A symptom is something the patient feels and reports, while a sign is something other people, including the doctor may detect. An example of a symptom may be pain in the ankle, while a sign may be a swelling. Symptoms may vary and generally depend on the severity of the condition. Some have an uneven distribution of bodyweight and find that the heel of their shoes wears out more rapidly and more on one side than the other. The most common signs or symptoms of flat feet are pain in the ankle (inner side), there may also be swelling of the foot in general, swelling in the arch of the foot, the calf, knee, the hip, the back, the general lower leg area. People with flat feet may also experience stiffness in one or both feet. One or both feet may be flat on the ground (either no arch, or very slight arch). Shoes may wear unevenly.

Diagnosis of flat feet or fallen arches can be made by your health practitioner and is based on the following. Clinical assessment involving visual gait assessment, as well as biomechanical assessment. A detailed family and medical history. A pain history assessment determining the location of painful symptoms. Physical palpation of the feet and painful areas. Imaging such as MRI or x-ray can be used by your practitioner to assist in the diagnosis.

Most patients can be treated without surgery using orthotics, supportive shoes and braces. Because of the progressive nature of PTTD, early treatment is advised. If treated early enough, your symptoms may resolve without the need for surgery and progression of your condition can be arrested. In contrast, untreated PTTD could leave you with an extremely flat foot, painful arthritis in the foot and ankle, and increasing limitations on walking, running, or other activities.

Since there are many different causes of flatfoot, the types of flatfoot reconstruction surgery are best categorized by the conditions. Posterior tibial tendon dysfunction. In this condition, the tendon connecting the calf muscle to the inner foot is torn or inflamed. Once the tendon is damaged it no longer can serve its main function of supporting the arch of the foot. Flatfoot is the main result of this type of condition and can be treated by the following flatfoot reconstruction surgeries. Lengthening of the Achilles tendon. Otherwise known as gastrocnemius recession, this procedure is used to lengthen the calf muscles in the leg. This surgery treats flatfoot and prevents it from returning in the future. This procedure is often combined with other surgeries to correct posterior tibial tendon dysfunction. Cleaning the tendon. Also known as tenosynovectomy, this procedure is used in the earlier and less severe stages of posterior tibial tendon dysfunction. It is performed before the arch collapses and while the tendon is only mildly affected. The inflamed tissue is cleaned away and removed from the remaining healthy tendon. Tendon transfer. This procedure is done to correct flatfoot and reform the lost arch in the foot. During the procedure, the diseased tendon is removed and replaced by tendon from another area of the foot. If the tendon is only partially damaged, the inflamed part is cleaned and removed then attached to a new tendon. Cutting and shifting bones. Also called an osteotomy, this procedure consists of cutting and reconstructing bones in the foot to reconstruct the arch. The heel bone and the midfoot are most likely reshaped to achieve this desired result. A bone graft may be used to fuse the bones or to lengthen the outside of the foot. Temporary instrumentation such as screws and plates can also be used to hold the bones together while they heal.
« Heel Serious Pain All You Need To Under… Apparent Leg Length Discrepancy Treatme… »
Profile

Login to quote this blog

You cannot quote because this article is private.